We want to give you an unforgettable summer bursting with fun adventure and equipping you with skills that will stick with you for life. This is why our leisure programme is filled with unique and exciting  trips, the CPD accredited Be a leader programme and fun-filled, challenging and thought-provoking elective activities including watersports or horseriding!

Make the most of having a stunning, secluded beach right on your doorstep. After morning lessons and before lunch, we will enjoy beach time every day. Swim in the sea, play beach games, participate in watersports or simply relax. You will be in paradise, and we want you to enjoy it.

Take a deep dive into Greece’s fascinating history. Travel back in time to the ancient sites of Nauplia, Epidaurus, Nemea and Mycenae. Enjoy a day trip to the magnificent city of Athens and explore the striking Acropolis. The island doesn’t allow private vehicles in the town, so people get around by walking, horse-drawn carriages, bicycles, mopeds, and motorcycles. You will explore the islands by bike, admiring the surrounding beauty and discovering hidden treasures, including caves, churches, monasteries and lighthouses. 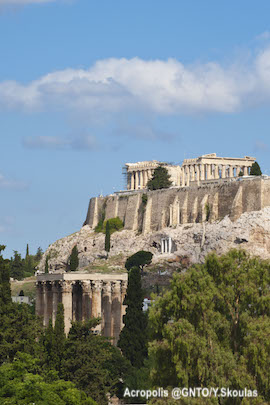 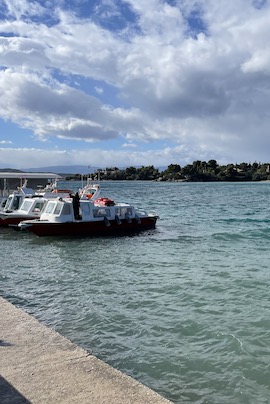 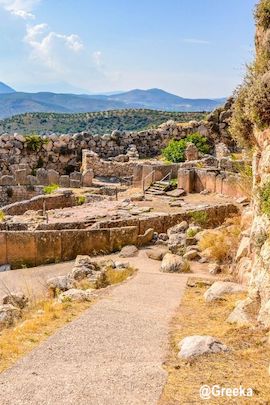 We’ll show Greece as you’ve never seen it before. Get ready for a trip through the centuries as we soak up the following sights:
Mycenae
Mycenae was an ancient city in eastern Peloponnese, home of the legendary King Agamemnon. The archaeological site of Mycenae is located abοut 90 kilometres southwest of Athens. The city hosts the “Great Cyclopean Walls” surrounding an almost triangular acropolis and some amazing architectural masterpieces like the legendary “Lion’s Gate”, the “Treasure of Atreus”, the “Royal Tombs”, and the archaeological Museum.
The city of Mycenae is the largest and most important centre of “Mycenaean” civilization. Mycenaean is the culture that dominated mainland Greece, the Aegean islands, and the shores of Asia Minor during the late Bronze Age era (1600-1100 BCE). The Mycenaean Era occupies the tail end of the Greek Civilization, which flourished in mainland Greece since 3000 BCE.
Nauplia (Nafplio)
One of the most beautiful towns in the area of Argolis (in eastern Peloponnese) as well as one of the most romantic cities all over Greece, Nafplio was the first capital of the newly born Greek state between 1823 and 1834. According to mythology, the town was founded by Nafplios, the son of God Poseidon.
Built at the foot of two fortresses, Palamidi and Akronafplia, it currently has about 19,000 inhabitants. During the Mycenaean period, the city flourished as one of Greece’s most powerful naval states.
Ancient walls, medieval castles, monuments and statues, Ottoman fountains and Venetian or neoclassical buildings capture visitors’ attention with their unique architecture and beauty.
Epidaurus
During ancient times, the small coastal town of Epidaurus was considered the most famous healing centre of the Greek and Roman. The Sanctuary of Asklepios (god of medicine) at Epidaurus is a remarkable testament to the healing cults of the Ancient World and witness to the emergence of scientific medicine.
Nowadays, Epidaurus is probably most famous for its theatre, Epidaurus Theatre. The Ancient Theatre (c. 340-330 B.C.), a renowned monument included in UNESCO’s World Heritage Site list as part of the Sanctuary of Asclepius, the god of medicine for the ancient Greeks.
The dramatic performances staged in this theatre were watched by the god’s patients during their stay at the healing centre. Since the 1950s, ancient theatre plays have been performed here every summer, as per the Athens & Epidaurus Festival programme.
This monument stands out as a unique artistic achievement through its admirable integration into the landscape and, above all, the perfection of its proportions and incomparable acoustics.
Nemea
Nemea is one of the popular destinations in the Peloponnese, a significant winemaking region of great archaeological interest. The huge viticultural zone of Nemea covers an area of 26,000,000 m2. The grape variety that has been cultivated for over 3,000 years in the area is the red “Agiorgitiko” varietal, which has turned Nemea into a fascinating wine tourism destination.
Nemea is an ancient site in the northeastern part of the Peloponnese. The small village of Archaea (Ancient) Nemea is immediately southwest of the archaeological site, while the new town of Nemea lies to the west.
Ancient Nemea was once the venue for the biennial Nemean Games, in honor of Zeus. Three original columns of the imposing 4th-century-BC Doric Temple of Zeus survive, and the on-site museum displays rich finds from the area. The atmospheric stadium is nearby.
Here, according to Greek mythology, the divine hero Heracles overcame the vicious monster “Nemean Lion” while during Antiquity, the Nemean Games (one of the four Panhellenic Games of Ancient Greece) were held every two years in a “Stadium” which could accommodate 40.000 spectators. This stadium was built 400 meters southeast of the “Sanctuary of god Zeus” (Nemea was not a city but a sanctuary of Zeus).
Athens
Athens is the historical capital of Europe, the birthplace of democracy, arts, science and philosophy of western civilization.  Home of Platon, Socrates, Pericles, Euripides, Sophocles and Aeschylus.  Athens is one of the world’s oldest cities. It’s recorded history spanning around 3.400 years and has been inhabited since the 11th millennium B.C.
The city of Parthenon is an open-air museum. A large part of the town’s historic centre has been converted into a 3 km pedestrian zone, one of the largest in Europe. Whether on foot or by bike, the “Grande Promenade” around Acropolis is an unforgettable journey through history.
Trips in Greece perfectly complement our unique learning programmes designed for students aged 12-14 and 15-17, accredited Be a leader programme and Elective activities.